Stand by your man, erm, bed 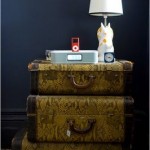 There’s no rule that says your nightstand has to be an actual nightstand.  For those who might not be able to afford “real” furniture, or maybe just those who like to get creative, you can fashion a nighstand from things you might have around the house.  The classic example would be a stack of thick, hardcovered books – not just functional but a conversation starter as well.  Chairs make excellent and eye catching nightstands that also serve a utilitarian purpose – extra seating in a pinch.  Even something as simple as an upturned waste basket, a kitchen stool, or even a cardboard box (with or without a fabric cover) can be transformed into nightstands.  Scoping out thrift stores or yard sales can also yield interesting, purposeful items, such as plant stands (this is a handy DIY tutorial), old luggage, or construction materials such as glass blocks.  When you think about it, the sky’s the limit – all a nighstand really is, is a surface, and there are untold objects that could serve as such.

Have you encountered any unique items masquerading as nightstands?

Brooke has been a bonafide bedding snob since 2002 & has learned the pleasure of sleeping on truly fabulous sheets. In her spare time she bakes copious amounts of yummy, not-so-good-for-you food; reminisces about how she used to have lots of spare time for reading; & does her best to keep her 3-year old, tiny-dictator-of-a-son away from certain danger.

Pillow Ninjas are back, and featured in the Portland Press Herald!

Black Friday Sale – 25% Off Everything at Cuddledown.com!